Women's Half Marathon: I Survived!

I Survived the Women's Half Marathon!

I never would have considered myself a runner. I actually never thought I would become one or have any desire to become one. The reason I signed up to do this half marathon was because of a good friend of mine named Jess. Jess was doing the Rock n Roll half marathon last year, and I jokingly said to her, "Hey, by the end of the year I will be doing one!"  I don't think I really meant it, but when registration opened, Jess called me to remind me!  (By the way, Thank you Jess! I am so proud for doing it!)

Fast forward 6 months... I am an Ambassador of Health for the Women's Half Marathon, and  I am running in it! WHAT!!! That is crazy! In the process of all of that, I became an ambassador to Polar, Fitfluential, Sweat Pink and Girls Gone Sporty. Crazy right?? Polar has even sent me a racing jersey and I am officially on the Polar team! 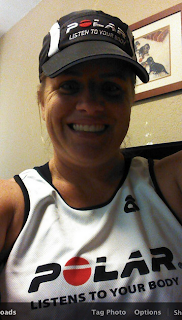 I picked up my race packet at the expo on Friday. I was so nervous. It all seemed so absurd. When I looked at my bib, tears filled my eyes. I had really done this. I had gotten here. It was real. I had goosebumps. 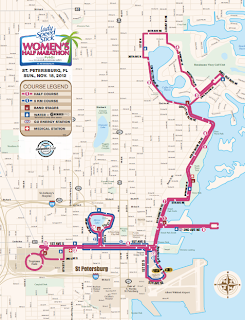 On Sunday, race day, it was surreal. I felt almost detached from my feelings. I didn't really know why. I had expected to feel more emotions, but it was just calm. The race started and I just ran. I was doing pretty well til I got to mile 7. I had already run through Snell Isle and was headed toward the Pier. I was actually on the same trail that I usually run on my long runs. I suddenly got the worst foot cramp. I have never had one, and it sucked. I stopped to retie my shoes thinking that would help. This is when the "Mindy self-doubt" began. I began thinking things like, "What are you doing? You aren't a runner! You are in over your head!" There was some serious MEAN self-talk going on. I struggled for the next 2 miles or so. Both of my feet were cramping and it hurt to step. I was beginning to think that I would just walk when Irealized that I needed help.  Suddenly, I remembered that ALL things are possible through Christ! Philippians 4:13. So I asked God to help me. I asked him to stop the negative thoughts and take the pain in my feet away. I talked out loud to God. I told him why I was running. I asked for help. I knew I need Him!

I realized that I was capable of doing this. I didn't feel great and my pain didn't go away, but I did shut down the negative thoughts in my head for some time. I realized at mile 12 that I was truly almost there! As I turned the corner to the finish line,  I had tears. I realized that I had done this! That girl who was a pound away from 200 last January has run a half marathon!!! I wasn't fast and I was the last in my group of friends, but I did win! I beat the negative thoughts, and I proved something to anyone and everyone, especially myself! 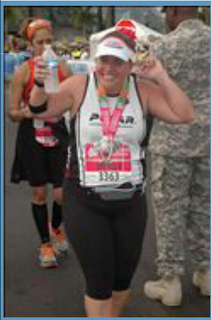 I was so honored to be presented with my medal from a gentleman from our military. How humbling to be praised by someone who protects my freedom daily. This picture shows my excitement and more importantly, IT IS OVER!!!

I am going to sign up for the Rock n Roll Half in February. I don't love running half marathons yet, but I know they are good for me, so I am not about to stop! I am looking forward to focusing more on my weight loss and less on the running training.