Citi's Every Step of the Way and $25 Visa Card giveaway!

This post was created in partnership with Citi®. All thoughts and opinions are my own.

Athough the Olympics are over, the Every Step of the Way campaign is still going strong. Citi has joined forces with some amazing olympic athletes. You can vote to award Citi's $500,000 donation to the 9 community programs in need.


Check out the Citi's Every Step of the Way Program HERE


DAN JANSEN:
Anyone who follows the winter games remembers this name and probably the picture below.
In 1988, Dan lost more than just his chance to medal in the speed skating event in the Olympics, he lost his sister, Jane to cancer.  The morning of his big race in Calgary, he found out that Jane had lost her battle with cancer.

Hear Dan talk about hearing the news and knowing he would have to skate later that day: 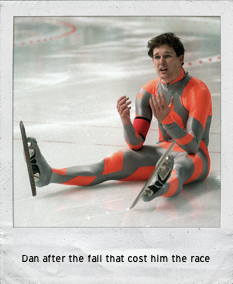 Anyone who was watching that day remembers Dan's race. It was so painful to watch him slip and lose
his dream of winning a medal. I was 14 years old and I remember sitting on the couch crying with my mother. America mourned with Dan that night. Our hearts were broken for him and his family. I had been following Dan's story, and I thought he was awful cute (his picture was on my locker door...) I couldn't believe I was watching this.
That didn't keep him down though. Dan returned to the Olympics in Lillehammer in 1994. He won the gold medal.  The thing I remember most was that it wasn't just Americans rooting for him. This time it was the world. Everyone wanted to see this man overcome what happened to him. And he did. Then he skated his victory lap with his baby daughter Jane, named after his late sister. There is a very special mark on his medal...
What happened to Dan makes him a true hero. His story is timeless and is one that I personally enjoyed sharing with my 10 year old son. I think it is important in athletics that we focus on the good and resilient people who have such inspiring stories to tell. These are the heroes our children need to know about.

20 years later, Dan's struggles have inspired him to help other athletes. Here is why Dan is a part of Citi's Every Step of the Way program:

GIVEAWAY TIME! Who wants to win a $25 Visa Gift Card?
You must comment which Citi athlete/community program inspires you the most and visit the Every Step of the Way website to vote. Tell me who you voted for.
a Rafflecopter giveaway

What is Citi's Every Step of the Way Campaign?