PDQ in St. Petersburg is now open!
I hope you enjoy the pictures and the vlog filmed by my son, Bryce!

When I was contacted by  Caroline  from The Tampa Bay Lady Bloggers  to blog about PDQ earlier this month, I was thrilled. My brother lives in North Carolina where they have a restaurant called Tenders. PDQ was started under the name
Tenders. We have eaten there many times.

PDQ is known for its fresh chicken tenders, made to order sandwiches, hand-spun milkshakes and fresh-cut daily fries. According to their web site, it was founded on the concept that high-quality food, memorable service and genuine hospitality were the cornerstones to a great restaurant.

Well, let me be the first to tell you that they did that and then some!!!

Not only did we LOVE our visit, but my son has decided that he is going to take his friends there for dinner on Friday for his birthday party! I will be blogging about that next week so that you can see what other 8 and 9 years old are saying!

As we walked in, the hospitality was overwhelming! There were so many smiling faces greeting us. Dorothy, from North Carolina and St. Pete's own, Kelsey from Canterbury were two people who wowed us with their kindness and genuine hospitality. It's obvious that PDQ is making great choices with the people they are hiring.


My son, Bryce, was wowed by the big screen TVs. This kid hates missing a football game, so he was satisfied with that alone! They even gave him a PDQ t-shirt!


We were told right away about the menu and even heard about some of the "must-try" items. I knew that I need to try the grilled turkey sandwich! YUM! My mom had the crispy turkey sandwich. My dad and Bryce stuck with the Chicken Tenders. Believe me it was definitely a hard choice.

For side items we tried the fresh apple slices with toffee dip (oh my gosh! You have to have this! I cannot wait to go back for more.) We also had their freshly cut fries, and I do think I have a new favorite french fry!!! And my dad tried the fresh coleslaw with blueberries (who would have thought? And so delish!) 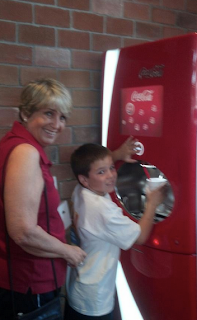 They also have a really cool soda machine that Bryce loved using. He thought it was really cool. At first he wanted sweet tea, but when he saw all of the soda choices, he couldn't resist using the cool machine. Grandma helped, but he made sure she knew he could do it by himself! I, on the other hand, had to go with the hand-spun strawberry milkshake... Yes I went off my diet, but there will real strawberries in it! It was to die for!


Another really cool thing was that one of my father's former football players, Jimmy, is the manager there. He is a great guy! Stop in and tell him you saw him and Coach on Mindy's Fitness Journey! 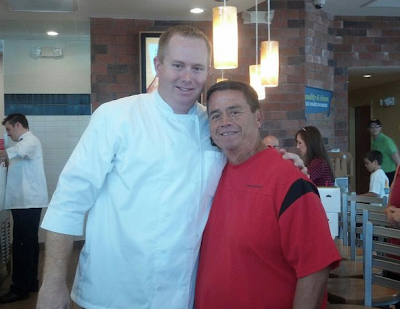